Should you sign your child up for travel hockey? Here’s what you need to know.

By Warren Tabachnick (with special contributions from Lisa Wild)

This article was previously published and contains updated information

Travel hockey season is coming up. Maybe you signed up your child to play in a local house league or are getting them ready for the varsity team tryouts. But for those who can’t get enough hockey, however, that’s just not enough.

In several parts of the country parents are signing up kids as young as 8 years old to play travel hockey. In many instances kids at the Mites level (8 and under) are not cut, so they are pretty much guaranteed a spot on the team roster. But that doesn’t necessarily guarantee them much ice time if they don’t skate too well. As happens far too often, many parents have visions of the future that are sometimes very unrealistic.

In such cases where the child is very young, parents should think twice before making this type of commitment. The reality is that to a midget, junior, or college hockey coach, travel hockey usually does not have much bearing.

Travel hockey is the alternative (or additional) outlet for the youth hockey player who is looking for more intense competition. It generally offers a higher level of play which, it is hoped, will help improve their skills and may ultimately give them a better shot at making it to the next level—be it prep school, juniors, college, or even just another travel team.

In case you didn’t know it, travel hockey requires a major commitment of time—and money. There’s the extra practice time and those early-morning games miles from home. Another important consideration is the time away from school and other activities. For parents, it means having to give up their weekends—not to mention that precious, elusive shuteye. And then there’s the gas, tolls, wear and tear on the car, and the meals away from home. At the higher levels of travel hockey, the cost is much greater: the fees are higher and air travel must be factored in.

It is critical to know the exact time commitment going in, and what type of support network exists with the other parents on the team. If you have a traditional 9 to 5 job and must be at work five days a week, it may be quite difficult to keep up with the demand of the often-heavy travel schedule. These days it is not unheard of for travel teams to schedule 60, 70, and sometimes even upwards of 80 games per season! (Just to keep things in perspective, the NHL season consists of 82 games, which shows the intensity and commitment level of the professional teams alone.)

Half of those will be road games, and you can be pretty sure some will fall on weekdays. This leaves other parents having to chip in to help pick up some of the slack if you can’t get away from work. Again, these are critical issues that must be hashed out before you make the commitment. You will want to attend the team meetings ahead of time to discuss the game and practice schedule. You’ll also want to speak with the other parents. If the support just isn’t there and your child ends up missing a good portion of the games, it will not be worth the money and—more importantly—their own fulfillment to have them sign up for the team.

So Is Travel Hockey Right for Your Child?

Travel hockey will place your child among players, many of whom may be more skilled. Some might argue that exposing your child to superior hockey players will give them a better shot at improving their own skills. But it’s important to keep in mind that along with this higher level of competition comes a greater amount of pressure to perform. And since there is a heavier emphasis on winning, your child may at times be told to ride the pine. After spending all that time and money, how will that sit with you—or your young hockey player?

If your child is looking for a way to improve their skills, travel hockey might be the right thing to do. Aside from placing them among the better players, it offers much more practice time than they’d get from their high school or house league. The coaches are usually more knowledgeable, which means your child will soon have a better grasp of the game.

Kids who play travel hockey learn at an early age what it means to play on a competitive team. They form bonds with others at an early age and share the passion of this great game. If you do the research—selecting the right organization, speaking with the coaches and understanding their team philosophy—you’ll find travel hockey to be a very rewarding experience for both you and your child, along with the opportunity to make lasting friendships.

The Bottom Line: If you and your young hockey player are ready to commit the time, effort, and expense that playing travel hockey demands, then it’s right for you. For the serious player, it can offer the chance to develop skills that the other programs barely touch on, all while teaching your child some valuable life lessons about what it means to be a part of a successful team.

Watch for an article on tournament and travel hockey tips, coming soon! 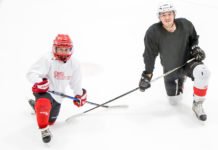