There are days when nothing seems to go right at all. Ever wonder why?

If you’re a rec hockey player, you probably have your share of good games and bad games. Days when every pass is tape to tape, and each shot ends up hitting the back of the net, or you make that perfect save on every shot on goal.

Then there are those days when nothing seems to go right at all. You blow every single opportunity and you struggle to keep upright on your skates.

Why is this the case? You’re still the same player; you haven’t suddenly forgotten how to play the game. Well, there’s a lot of contributing factors that could be at play. Confidence plays a big role, as does training along with a bit of puck luck. But did you know that the biggest factor is very likely something as simple as how much sleep you get in the run up to the game? Sleep is the essential ingredient for hockey players.

Fatigue plays an unbelievably important albeit negative role in the life of any athlete, especially for someone engaged in a fast-paced, heavy-hitting sport like ice hockey.

The difference between success and failure at a high level in any sport often comes down to the fractions. That’s fractions of a second and fractions of an inch. When you’re tired, you lose those fractions and your performance suffers greatly.

Why Sleep is Essential

We all instinctively know that a good night’s sleep is good for our health. Just recall the last time you got a solid eight hours. You probably leaped out of bed feeling pretty good. With a good night’s rest under our belt, we feel like we can take on the world.

There is now a mountain of evidence that backs up this instinctive feeling we all have. It appears there is not a single bodily process or mental function known to medical science that isn’t improved by good night’s sleep—or that suffers as a result of poor sleep.

Getting better sleep isn’t always easy. Fortunately, there are things you can do to give yourself a fighting chance. Check out this article on the 11 sleeping habits of successful people and see what we mean.

Sleep is especially important for maintaining good physical conditioning. When we enter deep-wave sleep—the form of really rejuvenating slumber that occurs later in the sleep cycle—the body releases human growth hormone (HGH). Not only is HGH a natural testosterone booster, it is something that’s vital for competition. It’s also the substance responsible for cell regeneration, growth, and maintaining healthy body tissue.

HGH is what rebuilds torn muscle fiber after a heavy training, practice session, or game. For athletes like hockey players, problems arise when their physical exertion on the ice or in training isn’t met by a reciprocal amount of time at rest. If hockey players sleep poorly or don’t get enough sleep, HGH and the body’s repair functions aren’t able to do their job properly.

To use a familiar analogy, sleep is like taking your car to the garage for service. Let the mechanic do his job and the car will come out running smoothly. Skimp on the proper maintenance and you are asking for trouble. You might be able to drive the thing but the ride isn’t going to be great, and it will likely break down soon.

The Power of the Power Nap

In today’s fast-paced world, it isn’t always feasible to get eight hours of sleep every night. But there’s a solution to this. It’s called taking a nap.

Many experts actually believe that humans didn’t evolve to sleep monophasically at all (monophasic is the term for an all-in-one block at night). No, they believe a biphasic (twice a day) system seems to match the natural ebb and flow of our energy levels throughout the day.

Sport sleep experts like Nick Littlehales, who has advised just about every soccer team in the English Premiership league, believe that sleep can be broken down into smaller blocks. Ninety-minute cycles in fact. And as long as you are hitting your quota of cycles each week you should avoid fatigue. Littlehales fully believes in the amazing rejuvenating power of regular napping. Maybe you should too.

As you can see, sleep is the essential ingredient for hockey players. Managing fatigue is all about prioritizing downtime above all else. There is no point pushing yourself too hard if you don’t allow yourself the time to recover. Your game will suffer and so will your body; then all that effort will be completely wasted.

Sarah Cummings is a self-confessed sleep addict. When she’s not curled up in bed you’ll find her researching and writing about all things slumber related. Improved sleep means an improved life in almost every aspect. She believes the same thing can happen for you too. 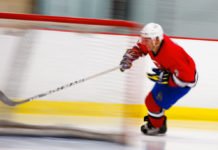