Ever wonder exactly what goes into a slap shot?


The slap shot. It’s one of the deadliest shots in hockey, and can reach speeds of over 100 mph. The video below delves into the science behind the slap shot. You can clearly see how much of the body is involved in the shot, as well as the considerable amount of stick bending. It goes without saying that this shot is quite complicated in terms of biomechanics.

The 6 Phases of the Slap Shot

Since we all know what a slap shot is, let’s dig deeper into the biomechanics of it. There are many factors that contribute to the velocity of the puck during such a shot; we’ve listed a few here:

In addition, the Preloading, Loading, Release, and Follow Through phases in the slap shot also contribute to the stick velocity, which in turn results in a change in puck velocity.

The Role of the Hockey Stick

The amount of stick bending is very noticeable, especially one from an elite hockey player. This occurs in the Loading phase, which is initiated by the ground reaction force and downward pressure of the lower hand on the shaft of the hockey stick. The greater the amount of flex in the hockey stick, the more potential energy is built up and transferred into kinetic energy that allows the puck to propel straight into the net. Another factor that contributes to puck velocity is Puck Impulse. Important factors to consider are:

There is evidence that elite hockey players can create much greater maximum puck velocity in their slap shot as compared to recreational players (no kidding!). One of the main reasons elite players are able to generate much faster slap shots is that they are able to flex their hockey stick much more during the slap shot, which in turn increases the puck- and stick-contact time duration. This allows the hockey stick to accumulate greater amounts of potential energy, and then release it like a whip which helps propel the puck straight into the net. 
If all this has got you feeling a bit down, don’t despair—we’re rec hockey players, after all! The video below will help you perfect (or at least improve) your slap shot technique.

From BPK201, an In Depth Analysis of The Hockey Slap Shot. Study conducted by Alan Jin, Kim Hilton, and Nicole Thomas of Simon Fraser University, Burnaby, BC, Canada. 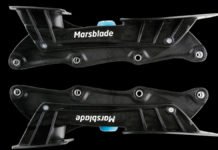 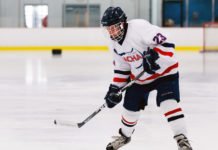 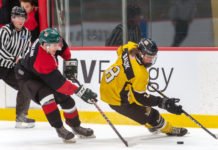 How to Improve Your Stickhandling