Sitting alone in the stands, I ask myself, “Am I the only rec hockey spectator here?”

My husband is playing hockey tonight.

Inevitably, my response is always a firm and final, “No!” I am the reluctant rec hockey spectator. The why of this fact will soon become clear. Here’s my story:

I used to go to all of his games, all of the time, in fact. No matter how late those games were, it didn’t matter. I was there in support of my (then) boyfriend. Game time did not matter. Waiting time did not matter (both before and after the game). There were those bleary-eyed mornings when I headed off to work on half a night’s sleep, but none of it mattered. I was at the game the night before to support my loved one!

Sadly, most of the time I was the lone fan, all alone in the rink, supporting my loved one—even though there were two teams playing. I kept asking myself, how come no one else is here representing? Where are the other rec hockey spectators?

Then there were the few times when other “hockey wives” actually did show up. I tried to make friends, but in hindsight I think I just did not fit in. Frankly, you have to know me to like me (never mind love me). I am kind of ‘alternative’; I’ve got several tattoos; a few piercings; and, yes, I will wear motorcycle boots with a pretty, flowing skirt, if it fits my mood.

To be fair, I think they just did not want to be there. And, honestly, neither did I.

As time went on, it became more difficult to go to my sweetheart’s late-night hockey games. I was there early and waiting for the game to begin. I was all alone during the game. I was there late and alone after the game, waiting for him to come out of the locker room.

Nose in My Book

Then, I had a brainstorm. A fantastic idea. I was so happy! Since I’m an avid reader, I can devour a long novel in an hour or two. So I brought a book to the next hockey game and read while I waited pre-game, (yes, during the game), post-game, and locker-room time. I was so happy and surprised when my honey came out of the locker room, asking, “Ready to go?” He, however, was not happy; it was written all over his face.

He was in a pretty dour mood on the entire drive home. Once we arrived, he just started slinging his hockey gear onto the equipment tree, without even acknowledging me. So I just went upstairs to bed. I thought to myself, Wow. It must have been a pretty bad game. I’ll wait until after he showers and comes to bed to talk to him about it.

As expected, after his shower he slipped under the covers. I touched his shoulder and asked how the game went. He sat up, looked at me and said quietly, “Honey, you would know how the game went if you even once took your nose out of that book you brought along. I actually scored a goal this time!”

Every part of my being prepared me for a fight. My blood started to boil (FYI: As my name would suggest I am a Latina by heritage). I was ready to blast him with stories… stories of all the times I have sat in a cold rink, alone, and he scored a goal this time? He should be scoring goals all of the time! But I did not do that. I calmed down and took a deep breath. Then I gave him a tender kiss on the lips.

Somehow I managed to convey to him that although I’m his Number 1 fan, I am a very reluctant rec hockey spectator. Late-night, rec hockey games—yes, even the ones in which he scores—are not how I am going to spend my evenings. To this day I try to remember what I actually said but it’s like mist… I just start to see it and then I just can’t manage to catch it. Regardless, whatever I said, he must have understood.

Somehow, we make it work. Yet (for some weird reason), he still manages to ask if I am coming to his game on any given evening. At least now we both have a laugh when I give him a firm and resounding, “No!”

Why, you might ask? Because I’m the Reluctant Rec Hockey Spectator!

In real life, The Hockey Wife is Christine Ramirez, a software QA and documentation specialist. And she is actually the wife of Warren Tabachnick, the man behind CrossIceHockey.com. A long-time hockey fan, Chris sometimes becomes disillusioned with the sport over the course of the season, due to hockey overload. But each year, when the Stanley Cup playoffs descend, her interest is once again piqued. 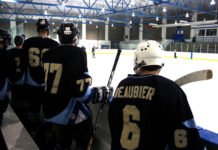 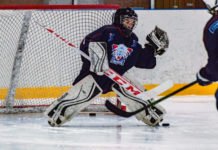