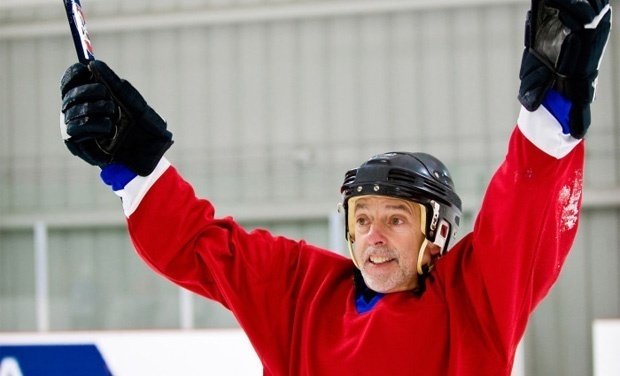 Of all the things I thought I might do in life, playing hockey wasn’t anywhere near the list. Growing up in northern Vermont, you’d think it would be in my blood but no, I barely even skated; I was more of a downhill ski racer. For whatever reason, I wasn’t remotely interested in hockey. Time went on and I moved to New York, but I didn’t watch—much less play—hockey and I couldn’t even name 10 NHL players.

A Rec Hockey Addict is Born

When I turned 40, a friend suggested we try something new. He had found a rec hockey league that specialized in taking rank beginners, and teaching them the rules and fundamentals of the sport. After eight weeks of grueling classes we would become “hockey players.”

One week and almost $1,000 later (I didn’t skimp on equipment), I found myself in the sweaty locker room of a local rink for my orientation, listening to a grizzled old man tell me, “This will be the most addictive thing you’ve ever done in your life.” I was looking at the door, but the investment I had made kept me firmly planted in my seat.

The next week, my first session of hockey school, I was in an outdoor rink at 11pm in 10º temperatures. Once again I was looking at the door, but the money I spent kept me on the ice. Two weeks later we were scrimmaging. I scored goal after goal, but was quickly schooled as to what offside was, and the goals disappeared. But just like that guy said, from that moment on I was hopelessly hooked. I was a rec hockey addict.

Seven years later, I now play on two teams in one league and on a third team in a house league elsewhere. I also play on a spring team as well as in one summer league. After all that, I have only improved to be a low-intermediate skater (how good can someone possibly be when they don’t learn the sport until middle age?). But I can say I am truly grateful to my friend (who still plays too) for talking me into it and turning me into the rec hockey addict I am.

I long for the games regardless of what day or time they start. It’s a fantastic workout, and I have made many good friends along the way. Frankly, I have a stressful job and there is nothing like a hard-fought battle on the ice to melt that all way (no pun intended).

I would recommend the sport of hockey to any guy (or girl) who is looking for something else in their life that combines competitive team play with exercise and great company.

Will Gensburg is co-owner of a shipping logistics firm. He lives to play hockey.