When it comes to minor hockey practice, coaching hockey is part art, part science. I learned that from mentor and former Winnipeg Jets coach Glen Williamson. The science includes critical components necessary in teaching the game. The art is the freedom that every coach has to put his or her own stamp on the team.

A few years back, we worked with close to 2,000 youth hockey players. Those boys and girls, ages 6 to 18, came from western Canada, eastern United States, New Zealand, Hungary, Ontario, and even Mongolia. (I may leave the Mongolian players out of this analysis due to slightly sketchy quantitative data as most of them brought only skates and stick and no equipment. But they sure loved the game!)

Many kids say their minor hockey practices lack skill-development drills. Scary thought isn’t it? A sign of a great coach is a well-executed hockey practice that is full of great art and solid science. How do your hockey practices compare? If you are a hockey coach, I hope you can reflect on your own coaching tendencies to help push your practices to new and greater heights.

Over the years we have identified many missing pieces in a typical minor hockey practice. Below are two that really stand out.

Kids need lots of shots in hockey practice. Junior, College and professional players often get extra ice time before or after hockey practice to shoot a few hundred pucks. Lack of ice time at the minor hockey level limits the amount of free time players have to work on the small details and get shot repetitions. In a typical minor hockey practice, many players may only get 10 to 20 shots on goal with big gaps between shots.

Coach Nate’s Recommendation: Always have at least 50 pucks on the ice. Save five minutes here and there to organize some quick succession shooting. While working on a small-area game or team concept in one end of the rink, a few players could get a pile of 20 or 30 pucks to shoot. Small-area skill drills also ensure lots of repetitions in a short amount of time. Some full-ice drills result in virtually no shots at all!

Remember, there is a time and a place for everything, but make sure part of your practice is focused on shot reps. Muscle memory is critical in mastering shooting mechanics.

Even many strong players with whom we work don’t handle the puck well while changing direction. Facing the play is obviously a critical skating skill and important hockey principal. Many traditional flow drills force players to skate only forwards.

Coach Nate’s Recommendation: Even if you are the biggest fan of filling hockey practice with only full-ice flow drills, integrate pivots and change of direction into those drills. For example, a D must gap up then pivot to backwards before retrieving a puck from the corner.

Even better, save 15 to 20 minutes in the middle of hockey practice for skill stations. Figure-8 open pivots around the cones while passing with a partner and handling the puck through the transitions is a great and simple drill to challenge a player’s footwork, agility, timing, passing, and puck control skills.

Nate Leslie played 7 years of professional hockey in Europe, including the Swiss National A League. He is the owner of Leslie Global Sports and director of the West Coast Hockey Prep Camp. Leslie has helped develop countless young hockey players, and this year alone he will oversee the training of some 1,500 players. He lives in Vancouver with his wife and 2 children. For more information visit his website at www.howtoplayhockey.ca. 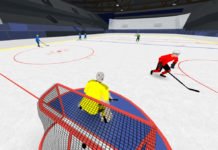