Hockey, like all sports, is filled with intangibles and idiosyncrasies that define the game, the culture, and determines who achieves the most success. We’ve all heard the saying, “Hockey is 10% physical and 90% mental.” That statement may be a bit inaccurate, but the overall message is spot on. In order to reach the high levels of hockey, you certainly need a high level of physical skill, but it is the mental aspect of the game that separates good from great.

The mental aspect of the game is what defines consistency in hockey. It’s why one player can dominate one night and be the worst player on the ice the next night. Talent is abundant. The fastest skater in the world doesn’t play in the NHL. The player with the hardest shot in the world doesn’t play in the NHL. The greatest league in the world is full of talented players who are able to think the game at a high level and perform with consistency. As the pace of the game picks up and the plays become sharper, so does their focus. To become an elite player means to prepare like an elite professional. And that’s where mental preparedness comes in.

These 5 tips on mental preparedness will help ensure you are always performing at your peak:

1. Mental Simulation: The Game within the Game

One of the best forms of mental preparation is visualization. This is the process of focusing your energies into picturing processes that occur within a game and acting them out in your mind prior to competition. Professional athletes use these types of techniques to prepare themselves mentally, allowing their mind to connect with their body before a game.

I used to sit up in a dark corner of the arena before games and look out over the calm, tranquil ice surface, going through every possible game situation in my mind. I would essentially play out an entire game, shift by shift, in my mind. As I pictured myself in each situation, I made sure that I was always succeeding; I was always making the right plays and coming out on top. This did two things: It boosted my confidence, and allowed me to prepare my mind for every conceivable game situation. When the game would start and I would find myself in different situations on the ice, I had a boost because I had already played the game in my mind and knew exactly what I had to do. I always felt this gave me a split-second advantage. In hockey, a split second can be an eternity.

2. Method Preparedness: You Think, Therefore You Are

Another preparation tip for athletes is to develop a character to personify when you strap on the gear before a game. Just like how method actors get into character before they have to perform, athletes can develop characters they wish to become before they step foot in an arena (this type of mental preparedness is common in sports like football). Players often develop “alter egos” who exude swagger and bravado.

If you have a specific role on a team, this method of mental preparedness can be used to help you emulate a certain style. As a coach, I used to help my players determine the style of play they wanted to try and imitate. One player I coached was a big power forward who had a nose for the net and wasn’t afraid to mix it up. We went on YouTube and found a five-minute compilation of Brendan Shanahan highlights that he began watching an hour before games. Every game day he would go into my office, close the door, and watch the highlights. This helped him get into the role of “Shanny.” When he stepped on the ice for the game, he knew exactly what his role was along with the expectations.

In hockey, each game can demand a different approach. Certain games are more physical, while others demand a more passive style. Depending on what is expected of you each game, you can develop different mantras. When I was playing in the ECHL playoffs in 2007/08, we were tangled with the South Carolina Stingrays in an emotionally charged best-of-five battle. They were our conference rivals and there was no love lost between us. The series was played entirely on the edge, and you often found yourself doing things that weren’t in keeping with your regular style of play. The entire series was a war. To get ready for each game, I had to develop a mantra and buy into a specific mindset. For the South Carolina series, my mantra became “Warrior.”

In order to encompass the mantra of Warrior, I began listening to Metallica and Avenged Sevenfold before games. Before I left my house, I watched specific scenes from Braveheart and Gladiator and I walked around with a constant scowl. I had to shape the processes of my pre-game routine to develop a warrior’s attitude. The loser of the series was essentially dead, so everything became about surviving. It was kill or be killed. Do or die.

Eventually we lost in overtime of Game 5, ending our season. My defense partner and I achieved our assigned task of shutting down Travis Morin’s line during the series (Morin’s line was one of the hottest lines in the ECHL that season). We held Morin to one assist in the series. We lost the series, but my mantra worked. I played my best hockey of the season in that series and everything had to do with my mental approach.

Focus is all about prioritization. At any given time of the day, you might have 10 different things on your mind: You might be thinking about getting an oil change; whether this Thursday or next Thursday is payday; what you’ll make for dinner; whether you should change your Facebook profile picture; what to get your wife for her birthday later this month; or whether or not you should ask your boss for a long-overdue promotion. As an athlete, when you enter the arena, your mind should immediately begin the process of prioritizing. When you walk through the dressing-room doors, nothing else matters but the task at hand. At this point, it still includes a lot of components. Leading up to warm-ups you are focusing on matchups, systems, preparations, and all the aspects incorporated in your pre-game routine. There is variety, but only one theme.

Once you step onto the ice, your focus narrows even more. Everything becomes about the moment; the past is gone. Even what you allow to enter your focus window becomes crucial. The human brain can only efficiently focus on two stimuli at a time. The first priority has to be what your senses are telling your body about what is happening on the ice, and in return, the reactions of your body to the stimuli. In hockey, this is called reading and reacting. The second focus priority is the communication from your team mates, helping you to make sound, split-second decisions.

Once you start letting other stimuli into that focus window, you start to lose efficiency and the potential for error increases dramatically. If you add in a screaming coach, captain, or team mate, or you let taunts from opponents into your range of focus, you will experience significant drop-offs in your prioritized focus areas and, essentially, your overall focus. Being able to block out these other aspects is what is known as fine-tuning your focus.

This is what inexperienced coaches or captains don’t understand. They think that coaching means being loud between the whistles, constantly screaming instructions. Effective coaching is preparing your team so that they can use the tools they have been given to read and react when the game is on. Plays happen so quickly on the ice that the brain can’t properly process what someone is screaming from across the ice. If anything, this creates confusion and a detrimental break in focus.

Hockey players are a bunch of superstitious weirdos. Superstition is the Santa Claus of hockey success and it’s part of what gives this sport its unique identity. It is the playoff beard, the rally monkey, and the scraggly, unkempt hair. It’s Patrick Roy talking to his posts, Wayne Gretzky wearing blue Tuuks, and Ray Ferraro’s pre-game chicken parm. But, like they say, “If it ain’t broke, don’t fix it.”

In reality, superstitions are part of a routine. The routine is what creates a flow of consistency for an athlete. For some, game-day routines can be comprehensive, and include any number of these rituals: waking up at a certain time; eating a specific pre-game meal; listening to the same songs on the way to the rink; walking into the rink via a particular path; taping your sticks a certain way; putting your gear on in a specific order and walking out to the rink in a specific order after a unique handshake with a particular team mate. Routines vary in complexity and creativeness, but they all have one thing in common—they serve the purpose of creating a feeling of security and consistency. When you are in the right frame of mind and your soul is at ease, it is easier for everything else to fall into place.

Jamie McKinven, a former minor league hockey player, is the author of the highly popular “10 Hockey Skills for the Real World,” as well as “So You Want Your Kid to Play Pro Hockey?”, which is available on Amazon and Barnes and Noble.com.

How do you prepare for a game? Which superstitions or rituals do you have? Let us know! 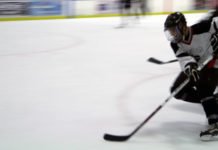 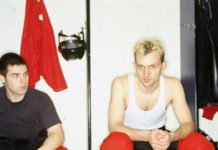 Overcoming Anxiety in Your Game