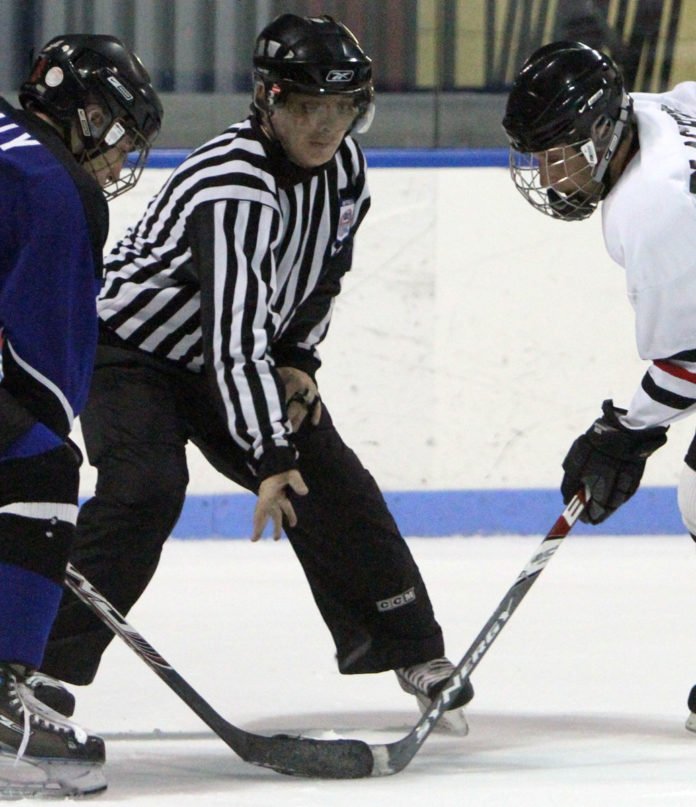 I started my referee career after I realized my playing days were over. Playing hockey since I was 7 years old gave me great perspective of the game, but the full brunt of the game could never be understood until I wore the stripes and learned how hockey refs keep it under control.

My first path to refereeing was when I had helped put together a roller-hockey league in Manhattan and the referees were unavailable, so I had to don the stripes for a game. Figuring that since I had played the game for many years, I was left with a comfortable challenge that I could handle this with no problem. But man, was I wrong. The game quickly went south when I was out of position, forgot to blow the whistle as if I was waiting for someone to pass me the puck, or just didn’t know the rules. Two seconds after the game was over and the embarrassment had subsided, I promised myself that my next referee gig would be filled with knowledge and ability. So I picked up the USA Hockey handbook and started my training to become a certified roller-hockey referee.

It’s only natural that my course took me back towards the ice, and I have never looked back. I’m currently registered as a Level 3 USA Hockey referee (Level 4 is the highest) and enjoy the atmosphere and work. Make no bones about it, being a referee is hard work. The effort required in accumulating knowledge and rules, deciphering and applying them in a game situation—all without losing your mind—takes tremendous strength of character and patience.

It is extremely important that a referee maintain a good healthy regimen that includes off-ice exercise, eating well and being open to learning. Some of the things I do to prepare for a game I am asked to ref at are:

Most games are played very well and most players are out for a good, healthy skate and a night off from their regular routine. But every once in a while a challenging issue presents itself in the form of some knucklehead who thinks a rec league game is his or her own NHL. I can tell you that I have experienced many of those situations as a referee. I once had a parent jump over the boards and take a run at me because his daughter ran into another girl and they both fell down in a squirt game. Unfortunately, this gentleman was either unaware of the loss of traction his work shoes had on ice or he just didn’t care. He fell on his head and needed some medical assistance. Needless to say, some people make a simple matter worse by not knowing the rules or the game.

It is so important to keep your cool out on the ice. I have reffed championship high school games where parents were ready to throw water, food or animals over the glass and onto the ice in a fit of rage. Truth is, 99% of the time it simply is because they do not understand the rules and want immediate answers to their questions, to which we cannot provide. No matter what is going on around the rink, our focus is on the ice, coaches and players.

Coaches are a much-needed element to the game. Just like anyone you might meet on the street, they have different approaches, attitudes, respect and hockey smarts, which each referee must deal with as professionally as possible. I have had a few disagreements with a coach or two, even one in which I apologized for not seeing a particular play. Keeping your cool with the coaches will show how well you carry yourself, know the rules and respect the players and the coach.

I currently work for a few rinks in suburban New York City and am looking forward to being part of a local roller hockey league in the summer. I also still referee for the roller hockey league I was involved with as it vaulted me to my current position with the Manhattan Roller Hockey League. I have also recently had the chance to referee overseas in Amsterdam with teams coming from France, Sweden and Germany, and have traveled to places like Washington, DC; Atlantic City, NJ; Hershey, Pa.; and Las Vegas, Nev., to serve as referee in ice hockey games. I am proud of them all. Those experiences have only helped shape my understanding of how hockey refs keep it under control.

I look forward to the months and years ahead as I make an effort to referee more college games and watch as they grow into NHL-caliber players, like I did just recently as one of them will be going on to the first round of next year’s NHL draft.

I still really enjoy refereeing any level of hockey, as the game is the same no matter what level or age.

Matt Cleary is an Assistant Controller at a large NYC Real Estate firm. He currently serves as a referee for Hockey North America, and dons the stripes several times a week during the busy season.

Refs: Tell us how you keep things under control.