A game of basketball requires only a ball and a good pair of sneakers, but no hockey player will ever be able to nail the top shelf or execute an outlet pass if his or her gear cannot withstand the strain of a long season. Since hockey gear is costly, it’s crucial to keep your equipment in good shape so that you don’t have to spend a lot of cash for a new stick or pair of skates, come game day.

The signature piece of hockey equipment and the most important part of your gear—a good pair of skates—go a long way toward improving your game. (At the professional level, some players use heated blades in order to get an edge on the competition.) Skates have one major enemy above all else: rust. While the steel of your skates has a good amount of rust-proof coating, there’s no way to keep a skate blade in good condition when it’s constantly exposed to ice, water, sweat, or a humid hockey bag. To avoid rust buildup that makes it difficult to balance on the ice, be sure to dry your skate blades after each skate with a towel and cover them with terry cloth skate protectors, which help to absorb moisture.

Ideally, players want their helmet to absorb all the damage from a puck, errant elbow, or fall to the ice so that their head remains intact. Since helmets use a system of tiny screws to keep the hard plastic together, repeated impacts can knock those screws loose. Make certain that the screws that hold together the chinstrap, the visor, and the frame are as tight as possible. While you can use superglue to replace a screw that has been knocked out, don’t try to bond a loose screw to the strap with glue, as this can put yourself in serious risk if the glue becomes unbonded.

It’s frustrating to watch an expensive stick explode in your hands and leave you in search of a new twig. New players or players without much experience shooting shouldn’t choose sticks with high flex (+5 or more), since this will likely result in a broken blade. A wooden stick, for instance, is heavier than a composite one but has very little flex and will be able to stand up to a lot of pressure before it breaks. Advanced players prefer hockey sticks with higher flex to get extra torque on shots, but remember that the power comes from your arms and not the stick itself.

It’s tempting to think that shin guards are immune to damage (other than from a slapshot) since they’re relatively inexpensive and require no thought other than the right fit for your legs. Keeping the hard plastic between your knees and shins intact requires some effort: Clean the straps and remove any string, cloth or tape that’s gotten onto the Velcro so that your shin guards do not slip during the game. When you tape your socks around your shin guards, make certain that you tape around the area between the knee and leg, rather than on either area, so that there’s no pressure on the protective parts of the pad. Finally, never tape or glue shin guards that have been cracked. Just like a broken stick, you must replace them when they break, as lower-body protection is too important to chance to faulty gear.

Since a netminder’s gear has to handle pucks at 80 miles per hour, you may think that there’s nothing he/she can do to make sure it stays in good condition. For keepers, however, the biggest danger to their pads’ shelf life isn’t the pucks, but rather the frequent contact with ice and water. Pads that are kept dry after each game will last a lot longer than pads soaked in sweat and water. Keep the material from rotting and the leather from fraying by storing pads standing up rather than lying down, in a spot that has good ventilation. Tossing a goalie bag in a closet until the next game will only lead to deterioration and rust.

Erin Wozniak is the Director of Marketing for Pro Stock Hockey, an online resource for pro stock hockey equipment. Erin is an expert in web strategy and digital marketing and is a devoted Blackhawks fan. Some of Pro Stock Hockey’s products include skates, protective equipment, hockey gloves, sticks and more. 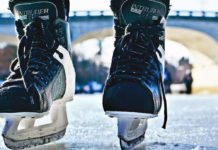