From the very beginning, our family has had deep roots in hockey.

It all started with the patriarch, whose Canadian heritage could barely keep him off the ice. While he hadn’t played much hockey while growing up, annual winter vacations to Montreal became a staple of our family recreation. Of course, those vacations were filled with frequent visits to outdoor rinks, comparably matched in quantity by the number of basketball courts in the US. And so our family hockey bond was launched.

My older brother was dragged reluctantly to the early practices at first, but gradually fell in love with the physicality and intensity of the game. He eventually found his groove as a defenseman with an offensive touch, and has not looked back since.

As for me, I was a spacey kind of kid, not sure quite what was going on as a mite/squirt, at times more focused on my falling suspender straps than the game itself. I started out as a forward, and one day a friend offered me the chance to try on his goalie pads at an open hockey session. I had a blast and spent the next few years in the crease (and subsequently developed the eccentricities of a goaltender).

As time went on for us, our family hockey time allowed us to gradually became more and more smitten with the game. My brother and I would practice stickhandling and shooting in the driveway for hours on end, while my dad continued to play in two rec leagues, bolstering his hockey playtime (but, sadly, not his skills).

At last, the moment arrived for my brother and me when the hours of practice we put in finally paid off. We thrust ourselves into the world of competitive hockey, joining travel and varsity teams that took us to the far reaches of the state (and sometimes beyond), with our dad planted behind the wheel and morally behind us through the ups and downs we all know youth hockey can generously provide. Though faced with the adversity of ice-time shortages and cantankerous coaching, our love for hockey never wavered. We stayed true to the course and knew that although we did not have a collegiate or professional future in the game, we knew it was something we would stick with forever.

Fate has now landed us, a father and two sons, on the same summer rec team. Now entering our fourth year together, we look forward to each summer for the family hockey, as a chance to play hard and celebrate our incredibly good fortune of being in such a situation. Our team consists of a great group of guys, whose mutual passion for the game has brought past and present teammates together to form a core that has stuck with our family since we began playing in the league. We gather once a week, every summer, to bask in the glory of adult recreational hockey and all that it entails.

While we may not all share the same last name, our team has become something of a family itself, immortalizing the camaraderie of adult rec league hockey. Night after night, we live out our dream. A dream to play the game we are so very passionate about.

Daniel Ross enjoys the bonds of family, both on and off the ice. 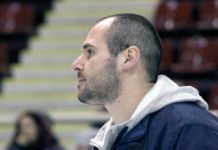