How thick is the ice?

The typical rink carries about one and a half inches of ice. This thickness provides a safe surface to handle all of an arena’s programming needs, from hockey to figure skating. Most arenas that host professional teams will carry about three-quarters of an inch of ice because these arenas have more time for maintenance and far less programming, leading to a higher quality sheet of ice.

How difficult is it to be a Zamboni driver?

If you can drive a car, you can drive an ice resurfacer. Most people can be out making a sheet of ice on the first day. However, it takes practice to become a true operator of the machine. Controlling the depth of the cut and discharge rate of the water are key skills that separate the Zamboni operators from the Zamboni “drivers.” Operators must also be knowledgeable about ice maintenance procedures, refrigeration, air handling, and the many other countless areas of arena management. As the saying goes, “it takes a day to learn, but a lifetime to master.” That certainly applies to being a Zamboni driver.

What’s an ice resurfacer? Isn’t it called a Zamboni?

Ice resurfacer is the generic term for the machine. Frank Zamboni invented the “Model A Zamboni Ice Resurfacer” in 1949; his “Zamboni” dominated the market until recent decades, when several competitors entered the space, such as Olympia, Engo, Sportice, and Icecat.

The Zamboni Company has fought hard to prevent “Zamboni” from becoming a generic term, like “Kleenex” or “Band-Aid.” During the 2010 Winter Olympics in Vancouver, several Olympia ice resurfacers broke down during a speed skating event, prompting the Zamboni Company to issue a press release admonishing the media for incorrectly reporting that the broken machines were Zambonis. In fact, a Zamboni machine was shipped from Calgary to help finish the ice and minimize the delay in the skating events.

Don’t you love the “I Wanna Drive the Zamboni” song?

I did. Then after hearing it a million times while making ice in between periods of a hockey game, it got a little old.

Kevin O’Connell is an ice technician who has worked in several capacities in rink construction, maintenance, and management. Follow him on Twitter: @IceTechGuy. 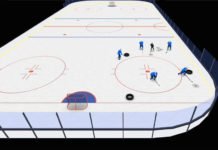