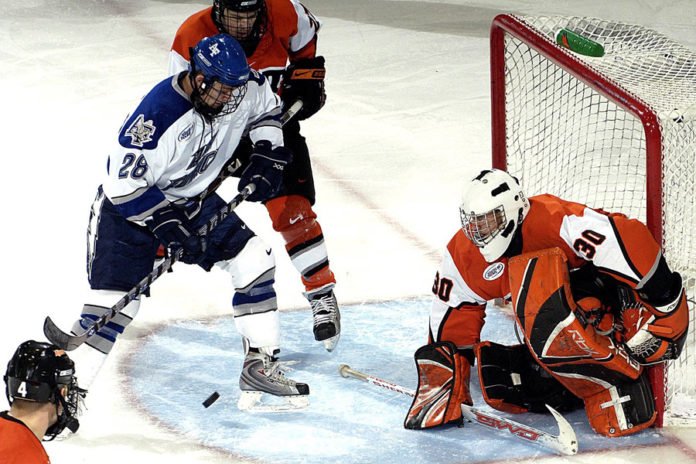 As a player who finished his career at the university level in the late 1980s, I grew up with the notion that if we were scoring on 10% of our shots then we simply needed to shoot more to score more goals. As a measure of our success, we would set a target of getting 30 or more shots on net in a game. We never gave much thought to the concept of puck management, and rarely talked about what those shots looked like; we just played the percentages and fired away.

That’s why it is most important for you to be more focused when it comes to shot selection and shooting with purpose—all of which all ties into effective puck management. As a starting point, statistically during the 2016 NHL season, 55% of all goals were scored from inside of 20 feet from the net (the distance from the net to the hash marks in the slot is 20 feet). This is in a league where, arguably, they have the hardest shots in the game.

Only 5% of goals were scored from a distance of 10 feet or more from the blue line. This is an astoundingly low number! Now, I am not saying NOT to shoot from the point but clearly, shots from the point need to be more purposeful in order to generate scoring chances in and around the net on tip-ins, deflections, and rebounds. Goaltending today is way more sophisticated and much better than it was 30 years ago. (To illustrate my point, watch these clips of Toronto Maple Leafs goalie Mike Palmateer.)

Here is what you need to keep in mind on a regular basis to improve your puck management and shot selection, both of which will ultimately create more goals:

1) The Black Hole Under no circumstances should you shoot the puck at the goalie’s belly button. It is a black hole and you will never see the puck again!

2) Keep it low Unless you are in close and going top shelf, do not shoot the puck at the top half of the net. Shoot low! You have a better chance of scoring and a much higher percentage of creating a secondary scoring chance.

3) Move it! If there is nowhere to shoot to score, look to pass the puck to a teammate or manage the puck to find a better chance. Any kind of puck movement will undoubtedly make the goalie move and create an opportunity for them to make a mistake. Shooting for the sake of getting a shot on net rarely scores a goal.

4) Get underfoot When in doubt, throw the puck into the goalie’s feet. Just fire it along the ice on net. Good things will happen.

5) Find a way In an era when it seems like there are six goalies on the ice (everyone is blocking shots these days), make sure the puck finds a way through to the net. Practice shooting around obstacles. Shots don’t have to be bullets to get through and create scoring chances.

6) The back door There is no easier goal than the tap-in on the far post. Be there and be an option for your teammates. 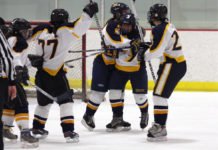