Looking to be more effective on the ice? Avoid these hockey mistakes and come out on top.

This post should be titled “Things that Drive Me Nuts,” but I wasn’t sure that was an appropriate title. I have to say, though, that as a coach there are hockey mistakes that happen on the ice that make my blood boil a little when I’m standing behind the bench.

They aren’t such grievous errors that I yell and scream at players when they come to the bench. But in my eyes, they are things that players absolutely just shouldn’t do.

Why do I feel I should list these hockey mistakes in a post? Because as coaches, I’m not sure we work on them (or talk about them) as much as we should in practice. Although to be honest, a few of them are just bad habits players need to stop doing.

Defensively speaking, taking away a good scoring chance on a 2 on 1 is just as important. My hunch is that as coaches, we practice 2 on 1s but we don’t really teach them or insist that players really bear down in that situation in our practices. I think it’s crucial to the success of a team that players recognize the importance of these situations. As coaches, we need to clearly make them aware of that.

2. Shooting at the goalie’s “bread basket”

I often joke with my players that Masters and Johnson did a study in the mid-1980s that proved that there never has been a goal scored when the puck was shot at the goaltender’s belly button. It’s important that your players know that every shot needs to be one that’s made with purpose. If it’s not a shot to score, then it needs to be a shot that might produce a secondary scoring chance.

For instance, if the shooter can’t see any net to shoot at, they should just throw it into the goalie’s feet. There’s a much better opportunity to score a goal on a secondary chance with the puck being fumbled at the goalie’s skates than being smothered in their chest protector. There are so many instances where a goal is scored on a 2 on 1 when the puck carrier made a perfect shot at the goalie’s far pad, creating a perfect rebound right onto his teammate’s stick for an easy tap in. I’d like to think that the shot pass was intended and not just a fortunate rebound after a bad shot.

3. Not getting the puck out up the boards in the defensive end

There certainly are some defensemen who are terrific at pinching and keeping the puck in. But when a forward has a good chance to get the puck out and doesn’t, it really grinds my gears. Similarly, in my systems, I always have the winger tightly covering the point man on the strong side in our zone.

It also drives me nuts when the puck zooms right past a winger that’s not tight to the defenseman and the defenseman has an easy opportunity to keep it in, or even worse, get a shot on net. When I played hockey, it was a gut-check moment when the puck came up the boards and you had to get it out. As a former coach once said to us, “pick the puck up in your teeth and crawl it out over the blue line if you have to.”

4. Not getting the puck in deep

I always say that if the puck gets to the red line it needs to go deep into the offensive zone. If it’s on a rush, the puck can’t be lost at the blue line. If it’s a dump-in, the puck has to go into the corner and get past the goal line. Not getting the puck in deep means that there is the distinct possibility for a turnover, quick transition for the opposition, and often a good scoring chance against.

Sometimes it’s the little things that make a difference in the final result of a hockey game. Often what it comes down to is just having good habits. Players who maintain good hockey habits will invariably mean more wins in the standings.

Here are 10 other bad hockey habits players need to work on:

Rick Traugott is a veteran coach who has served with Hockey Canada as a camp coach. His teams have won numerous championships and medals in international competitions. For more information visit his website, www.ricktraugott.com. Reproduced with permission of Rick Traugott.

Do you have any other hockey mistakes you (or your team or teammates) need to work on? Post your comment below! 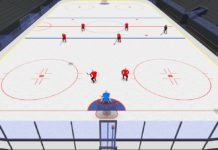